Giving Credit Where Credit Is Due

A few months back, I wrote a [post](http://www.nateshoffner.com/2013/03/a-well-deserved-apology “A Well-Deserved Apology) where I apologized to Mathew Kemp (aka Sniped) from Jagex. I finally felt as though I had some closure. Some peace of mind. Everything changed when the Jagex nation attacked.

The other week, an interesting detail was brought to my attention. In a recent update of Ace of Spades, they decided to finally include some credits. Somebody showed me a screenshot of what appeared to be a smear campaign against the original developer. I figured it was Photoshopped, as no reputable company would target an individual like that.

I decided to check in-game for myself and what do you know, there it was.

As a quick synopsis (as well as a bit of a preface) for those who don’t know, Ben Aksoy was the original developer of Ace of Spades. After selling the rights to Jagex, he later ended up working at their Cambridge office. In mid-late 2012, he was unhappy with the way things were being handled at the company and the direction in which the game was going, resulting in him putting in his final notice. After coming back from lunch one day, his hard drive in his personal laptop somehow magically broke, resulting in a BSOD. Additionally, stuff in his workspace was moved around. A fellow employee said the system admin had been at his desk. Upon approaching the sysadmin and asking about it, they denied everything.

This sounds a bit like a conspiracy at first and maybe it is. But the point remains that the hard drive just spontaneously broke over a short time period. Additionally, I don’t think anybody is surprised by some methods companies use in order to “protect” intellectual property and how poorly they treat their employees. For reference, feel free to read some of the reviews from current/previous Jagex employees online.

Before I propose my theory I have a bit of disclaimer. I’ll admit I have a bit of a personal bias against Jagex. On that same list is the Westboro Baptist Church, copyright/patent trolls, and whoever decided to cancel Oreo O’s. Basically, if you’re going to negatively impact/inhibit other people, society, or my morning ritual of pure bliss with milk, I’m going to have a personal bias against you.

So this is my theory in tying the two incidents together. As soon as I read “attempted to leave the building with sensitive intel”, I immediately thought of that situation from a few months back. Perhaps Jagex was worried that Ben would be leaving with source code on his personal laptop. It seems like it’d be just tad extreme to destroy/swap a hard drive in order to protect an investment, but I wouldn’t rule it out entirely.

As for the “Fear not the cops always get their man” part, I’m not really sure what that entails. I haven’t heard anything regarding Ben and the authorities. I may be looking too far into it, but regardless that’s quite a bit of slander.

Let’s move on and analyze those credits. First we need to take a solid look at that middle paragraph:

Anybody with a 2nd grade education is probably scratching their heads right now. Look at the last 2 sentences and how they repeat. No that wasn’t my typo, that’s in the game. It looks as though somebody made a last minute edit and copy/pasted the text without any final proof-read. Perhaps the text was just shifted to the right during the edit. If that’s the case, I would like to know whether this is something that was known before release or if it was edited in at the very last minute without anybody noticing.

Regardless of conspiracies, motives and other drama, one point still remains. I don’t care what company you work for. No company should be personally attacking an individual like this. Even moreso after everything he was put through until he finally had enough. Is it not bad enough that you ripped the guy off and made false promises, only to screw him over in the end? Then you recreate a watered-down copy of the game that panders to drooling Call of Duty kids while completely alienating the existing userbase. The game has severely flopped and you have yet to make a real profit off of it. Yet your priorities still seem to be personally attacking the developer. Good game. (No, not Ace of Spades 1.0. Are you even paying attention?)

They made sure to give credit to Blitz Game Studios and Mat, but not the primary developer, at least not by name. It’s not as if they could’ve totally forgotten Ben’s involvement, which makes me think this was a known edit.

We could give Jagex the benefit of the doubt. Maybe they aren’t referring to Ben. Maybe it’s just complete satire which just happens to fit that exact situation perfectly. Maybe Jagex didn’t break his hard drive in his laptop before leaving. Maybe Jagex’s “little brother” snuck in and edited the credits without anybody knowing. Who knows?

Because I’m on a roll, here are some other points of interests within the credits:

Ahem, “hundreds of thousands” should be changed to “hundreds”. Don’t flatter yourself. You may have made claims of several hundred thousand users before, but the actual stats say otherwise.

Actually, if you would’ve listened to the community for once, maybe the game would’ve had a chance at actually being a success. Try checking your forums, steam community, in-game players, and the rest of the internet.

As somebody who contributed with the development of the game, the community, as well as my own software, you can keep your salute. You already desecrated one developer, leave myself and any others out of it.

And of course for reference, here are some screenshots of the credits: 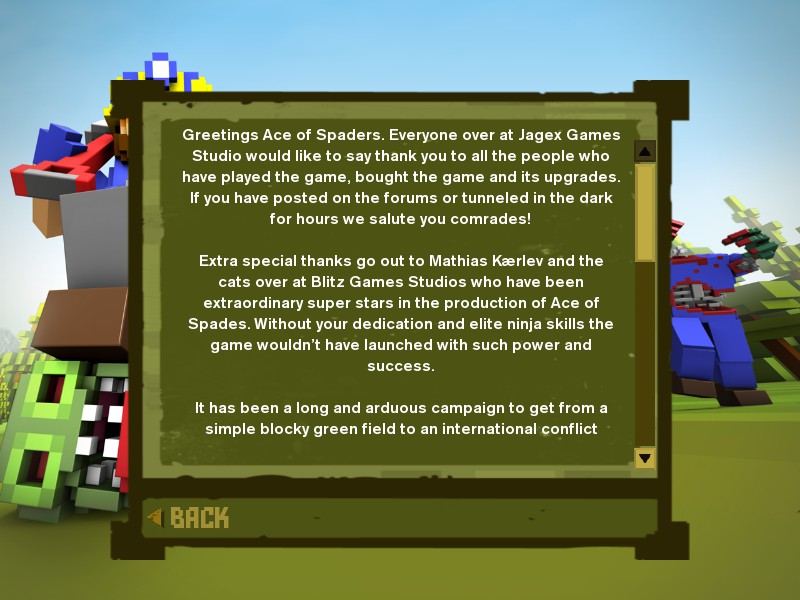 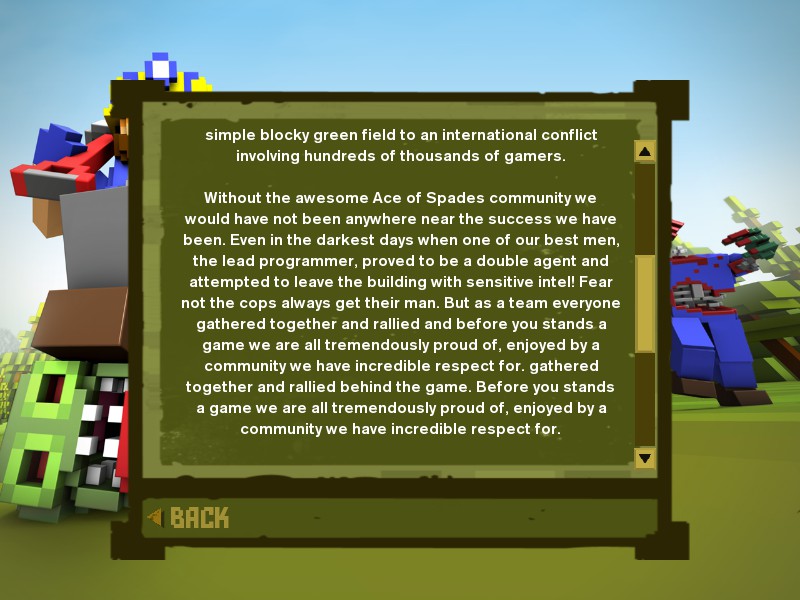 This post in no way reflects the collective opinion of Build and Shoot and/or Buld Then Snip, LLC.

Not included in that change log is the fact that they completely removed the credits page. Instead, there is an image in the background crediting Blitz Game Studios.

So, kudos to Jagex for removing the defamatory messages from the credits, but they still failed to take responsibility for their mishap.

Not surprised that once again, you guys have have half-assed the job.